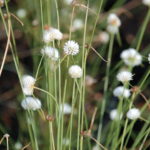 Sedges
The basal leaves of Ascolepis capensis are tufted and it blends well with grasses. The white flowerheads also last very long. Plant in a damp spot.
View
Bulbostylis burchellii Sedges
Bulbostylis burchellii, a little sedge, is very common in Gauteng where it appears amongst the grasses on rocky ridges,
View
Coleochloa setifera Yellow-flowered sedge
Sedges
Cyperus obtusiflorus grows amongst the grasses where there is always a bit of damp.
View
Cyperus prolifer Dwarf papyrus
Sedges
Cyperus prolifer is an attractive, medium-sized plant, suitable for waterside planting. For best effect the plants should be allowed to form a large colony.
View
Cyperus rupestris Sedges
Cyperus rupestris is a dwarf perennial that normally occurs on the edges of rock sheets where the soil is shallow and moist.
View
Cyperus sexangularis 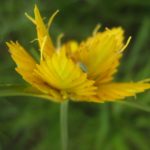 Tall star sedge
Sedges
Cyperus textillis has stems (culms) that are 1 – 3 m tall, and have a tuft of 10 to 25 cm long, flat, leaf-like bracts that radiate out from their tips. Grows along river banks and streams, in pools, dams or marshes.
View
Next »